Disputes Between Factions Inside Iran 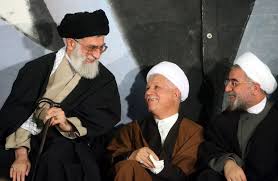 April 2016
A very intense feud, before and after the February elections in Iran, has come to light over hegemony of different figures and camps inside the Iranian regime. Of course, one should not think those involved in this dispute are at all concerned about the higher interest of the Iranian people. In fact, they only seek to fill their own pockets. Various factions inside Iran are no different from each other. In fact they merely provide different methods to reach the regime’s desired objectives. Both factions know quite well that the as far as the Iranian people are concerned they care less about any of the regime’s factions, considering them all as one.


Iranian supreme leader Ali Khamenei delivered a message on February 29th expressing his consent about the sham twin elections and his gratitude for those who organized the entire process. The main question now is does he truly approve the elections results?
It is crystal clear that Khamenei must pose happy and delighted, and he is forced to express his gratitude in public. It is obvious that he would never admit defeat in this regard. However, the truth is his defeat in these sham elections was too obvious to deny through such failed attempts. The people boycotted the elections and the regime’s own state media expressed concern in this regard, issuing different types of warnings and seeking solutions for this dilemma. Despite the fact that the entire regime had prepared to announce 70%+ participation in the polls, they were forced to declare 62% across the country and 50% in Tehran. In his message Khamenei was not able to use the term “epic” to describe these elections, whereas he had used this term for all previous elections.
Media outlets and senior figures associated to Khamenei’s faction have complained to such an extent that there is no place for any doubt in Khamenei’s defeat in this regard, especially after the nuclear setback his entire regime suffered. However, the most important comments were made by judiciary chief Sadegh Larijani who said, “Reformists inside the country are in cooperation with the Americans, English, Wahabis and ISIS, preventing servants from reaching the Assembly of Experts.”
Considering the remarks made by Khamenei two days prior to the elections, these remarks should be considered Khamenei’s viewpoint coming from his judiciary chief. Truly, what defeat is more catastrophic and disastrous for Khamenei than accepting the fact that even the chair of the Assembly of Experts, Mullah Yazdi, was ousted from the council in these elections?
Khamenei also shed light on the road ahead and the period after the elections. Under the cloak of the so-called soft reforms and Khamenei expressing his gratitude, one can easily understand the contradictions. This is especially true when he refers to the Rafsanjani-Rouhani camp and the irony in which referring to Rouhani boasting about bogus advancements made at the cost of losing the regime’s independence.
“Making advances doesn’t mean getting devoured by the world arrogance,” Khamenei said. However, in his message he didn’t specifically talk about a “resistant economy”, yet he did refer to “all-out advances made from within as the main objective.” This is another method of describing a resisting economy. Pro-Khamenei media outlets fell in line and focused on a resisting economy, being a nom de guerre for the Revolutionary Guards taking full control of the economy. This is the policy that Khamenei is seeking. Therefore, the path that Khamenei has traced for the future - emphasizing on his own policy against his rivals - is continuing the war over hegemony. This was never anything about peace and reconciliation.
Yes, there was a dispute over hegemony in Iran even before the elections. So what has changed in the war over hegemony after the elections?


The fact is after the elections the hegemony dispute in Iran will continue at a much higher level because this issue was not finalized in the recent sham elections. The Assembly of Experts and its fabric is one of the most important organs that can finalize this matter. Despite the fact that Rafsanjani may have the first vote in this council, the majority is still controlled by Khamenei. It is crystal clear that Khamenei will stand for his hegemony, fighting tooth and nail for it. He might be extremely weakened and vulnerable in comparison to the past, he still continues to control most of the power. It is also true that after the recent elections the Rafsanjani-Rouhani camp will be demanding more say and authority in state matters. As a result, there will be a very tough and intense war in this regard.
Posted by glo.thread.assess at 00:35