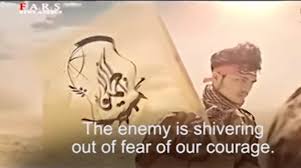 June 2016
As the Iranian people continue to oppose taking part in the Syria war, the Revolutionary Guards Quds Force has been forced to dispatch its most senior IRGC commanders to support the Levant dictator Bashar Assad. To this end, heavy casualties have been inflicted to senior IRGC commanders and these ranks no longer have any temptation to participate in the Syria war.


Iran began sending forces of the regular army 65th Special Forces Brigade to Syria, and these units suffered serious casualties in their first days in battle.
The Quds Force thus decided to begin dispatching as many young Afghans to Syria as possible. First the mullahs’ regime promised to provide residency to these young Afghans. The new campaign launched through propaganda methods in west Afghanistan was focused to provide money, different assets and residency to encourage them to in return participate in the Syria war.
These Afghan youths already face many problems in their own country, including economic poverty and the lack of adequate employment. Therefore, they easily fall for Iran’s deception and flood into Iran to file for these programs and be dispatched to Syria. This development has left a deep impact on the security of western Afghanistan, leaving the Afghan army facing a shortage in forces.
In this regard a NATO official recently said Iran recruiting forces from the men in Afghanistan and the border areas between the two countries for the Syria war has left the Afghan army facing a shortage of forces. The number of forces recruited by the Afghan army in Herat and other provinces in western Afghanistan have decreased and the army is facing a major dilemma, the NATO official added.
“If Afghanistan recruiting command can’t keep pace, that’s a problem,” said U.S. Army Col. Steve Lutsky, deputy commander of NATO’s Train Advise Assist Command-West. “We believe they [the Iranians] are recruiting Afghan males to fight ISIS in Syria,” he said, using an acronym for the Islamic State group. “That’s what we’ve been told by multiple people, which is one of the reasons why our recruiting is low in this area.”
“Iran pays better than the Afghan army, and you don’t have to potentially fight your family members,” he said.


In this regard, IRGC Navy commander Ali Fadavi said a number of IRGC forces are scheduled to be appointed as quick reaction forces, one being an IRGC Navy special forces unit. A special unit is an operational/training unit for various forces inside the country and abroad. The members of the “resistance” are amongst these individuals.
The “resistance axes” consists of Shiites from Iraq, Afghanistan, Pakistan, Lebanon, Syria and Iran. Currently these forces are fighting in the wars of Syria and Iraq.
In the last week of June the Syrian opposition said the recent decrease in Russia’s bombing campaign has forced the Syrian regime to suffer setbacks in the north, especially south of Aleppo and near Raqqa. This is sending a message to Syrian president Bashar Assad that has protested the calm witnessed by Aleppo.
After Russia became fully involved Iran believed it could easily take over Aleppo by sending its forces into Syria alongside Iraqi Shiite militias. Due to economic difficulties Russia was incapable in continuing its air campaigns, and was finally forced to downgrade its involvement. Iran and all its proxy forces, alongside the Syrian regime’s military units, began suffering major defeats in southern Aleppo and Raqqa. The situation reached a point where Qani, the Quds Force commander on the ground in Syria issued a letter saying if a new initiative is not launched in response to the defeats it will most definitely lead to the fall of Damascus.
The Quds Force sought to recover from the defeats in southern Aleppo and Raqqa, and it needed new recruits for this initiative. Therefore, Iran pulled over 3,000 Iraqi Shiite forces from the war in Anbar Province and dispatched them to Syria. On the other hand, Iran launched a propaganda campaign in western Afghanistan promising monthly wages and residency to young Afghans willing to fight in Syria. This provided a large number of incapable young recruits flooding into Iran as they were suffering from poverty. The bases Iran had allocated for these new recruits in the cities of Mashhad and Ghouchan were flooded with young Afghans. These youths received a very short 10-day training, and then dispatched to Syria.
On the other hand, Quds Force chief Qassem Suleimani has with his Iranian advisors always been directly involved in the wars in Iraq and Syria. Qassem Suleimani he will not return from Syria until this country gets on its own feet again.
The Quds Force is using young Afghan recruits as cannon fodders in Syria, and this is the main reason behind the rising number of casualties amongst Afghan youths in Syria.


The country of Syria, acting as a savior for the Iranian regime during the past 10 years, has turned against Iran and become a quagmire for the mullahs. This will finally result in the acceleration of Iran’s own downfall.
Posted by glo.thread.assess at 23:44