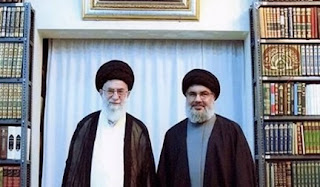 July 2016
Lebanese Hezbollah leader Hassan Nasrallah on June 24th said he is not concerned of U.S. banking sanctions, and the sanctions and banking/financial restrictions imposed by the U.S. have no impact on this group’s activities as all of Hezbollah’s budget is provided through Iran. This speech gained widespread coverage in a long slate of Arab media, and can lead to a major predicament for the Iranian regime.


The Hezbollah leader said the Congress bill and the decision made by the Lebanese Central Bank will have no impact since Hezbollah is not active through the banking network.
By saying, “As long as Iran has money, we have money…,” Nasrallah shed light on how Hezbollah’s budget is provided to this group through the same methods that military equipment and other necessities are provided for by Iran.
The Lebanese Hezbollah, similar to Hamas, have been designated in the U.S. terrorist lists.
Congress in December 2015 passed a bill sanctioning banks cooperating with Hezbollah.
The Lebanese Central Bank in May announced in consideration to the Congress bill around 100 bank accounts related to Hezbollah members, and all associated organizations and entities.
A portion of U.S. sanctions against Iran are imposed due to Tehran’s support for terrorism and have not been lifted following the nuclear accord. Non-nuclear sanctions against Iran have been one of the main elements of concern for leading international banks and financial institutions that remain hesitant in expanding their cooperation with Iran. A number of important European banks had prior to this been slapped billions in fines for cooperating with Iran and violating U.S. sanctions.
Following his remarks the Agence France Press reported Nasrallah has said his movement receives its necessities, from “food and clothing, to missiles and rockets” directly from Iran.
Nasrallah’s speech also received widespread coverage in media inside Iran, including the al-Alam, the Arabic language network of Iran’s official state TV and radio station, the IRIB.
“Hizbollah’s budget, its income, its expenses, everything it eats and drinks, its weapons and rockets, are from the Islamic Republic of Iran,” he said, as reported by the al-Alam website. “As long as Iran has money, we have money ... Just as we receive the rockets that we use to threaten Israel, we are receiving our money. We express our gratitude to [Iranian supreme leader Ali] Khamenei, the Iranian government and its president for their unsparing support during the past years. We will pay the paychecks and have no problems in this regard,” Nasrallah added.

Hezbollah obtaining money through non-bank channels
Another major predicament that Nasrallah’s speech will most probably have for Iran is related to his remarks regarding about money transfers from this country through non-bank channels. As Nasrallah described it, Iran also violates U.S. sanctions to provide the budget needed for Hezbollah militants and also resorts to sending cash to its illegal networks.
Iran is in the list of blacklist of money-laundering states due to its non-transparent financial activities, especially in relation to its efforts aimed at bypassing sanctions. The Financial Action Task Force, established under the initiative of the world’s seven major economic powers and in cooperation with other rising economic powers to confront money-laundering and the provision of financial support for terrorist groups, has decided to maintain Iran in its list of dangerous countries. In a session held by the members of this organization on Friday, May 24th in South Korea, no agreement was reached to delist Iran from the organization’s blacklist. This institute, known as the International Financial Observer, announced that any change in the status allocated to Iran, being a very important precondition for cooperation with global banks, is associated to Tehran’s effort to make its actions transparent and refrain from providing financial support to terrorist groups. In a meeting held recently in South Korea, the members of the special group denied Iran’s request and accepted to maintain the limitations imposed on Iran for the next 12 months to reach a clear conclusion regarding the pledges by this country, and decide whether to suspend its current blacklisting status.
In recent months Iran has attempted to convince various countries and European banks to re-launch their economic relations with Tehran and all of the visits made by the regime’s top diplomat to the countries of France, Germany, Austria and … were in line with this very objective.
In an interview with CNBC in May of this year Iranian Central Bank President Valiollah Seif said there were phone calls and negotiations between Iranian officials with FATF aimed at delisting Iran from this organization’s blacklist. Seif expressed hope Tehran would soon be delisted after recent measures and adopting laws to fight against money-laundering and confront terrorism, Reuters reported.
In such conditions, the motive behind the unexpected speech delivered by the Hezbollah leader on the continued illegal transfer of money by Iran to this group is unclear. Anyhow, it provides no help regarding Iran’s effort to relieve itself of its problems with the international banking network. In fact, it made the efforts of Iranian President Hassan Rouhani and his government in this regard even more difficult.
White House spokesman Eric Schultz on June 28th said in reaction to the Nasrollah’s remarks the financial interlocutors don’t wish to get involved in trade relations with countries that provide financial support to terrorist groups. He went on to reiterate if Iran continues its support of Hezbollah, this group will continue to enjoy a support for money and resource. This exactly why if Iran seeks to gain access to international markets, it is necessary to control its behavior, he added.


At a time when U.S. President Barack Obama expected Iran to change its behavior in the region following the nuclear agreement, he received an eye-opening response from Hezbollah leader Hassan Nasrollah, making it crystal clear that all the sanctions relief money Iran has received under the nuclear agreement have been illegally sent to terrorist groups.
Posted by glo.thread.assess at 23:30