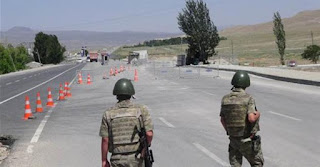 July 2016
One of the most important exports Iran has been engaged in in the past few years has been sending arms, bombs and missiles to various countries across the region. It has been years since Iran boasts of exporting “Islamic revolution” to regional countries, which of course means exporting terrorism and supporting fundamentalism groups to take control over regional countries.


States that during these years been victim of Iran’s so-called Islamic revolution exports and resulted in terrorism and unrest include Lebanon, Syria, Iraq, Yemen, Bahrain, Sudan and … In the past week two very obvious examples of arms and explosives exported by Iran were confiscated. I want to refer to these matters in this article:
On the first topic, Turkish officials are saying a truck carrying a 1-ton bomb was discovered and neutralized in the Iran-Turkey border. The Hurriyet daily of Turkey reported on Thursday, July 14th, the attention of civilians at the scene and customs agents became focused on a truck with a cable attached. After the truck was checked it was made clear that the cable was part of a bomb containing around 1,000 kilograms of explosives. Turkish security forces closed the two sides of the border crossings to neutralize the bomb. During this operation two hidden capsules of propane gas were discovered as part of the bomb.
Turkish Trade Minister Bulent Tofighchi confirmed the discovery of this bomb and said this Iran-Turkey border crossing, located in eastern portion of the Aghari Province in Turkey has been reopened. Turkish officials have not provided any further details and Iranian officials remained silent in this regard until Friday afternoon.
The operations carried out recently in Turkey, despite being in the name of ISIS, make it clear that Iran is providing for ISIS. Why? Because the recent discovery of a 1-ton bomb in the Iran-Turkey border makes this crystal clear. It is also made quite obvious why ISIS refuses to stage any attacks inside Iran.
Regarding the second issue, the commander of the 4th military district in Yemen revealed the National Army of this country have during the past few days confiscated a number of large trucks carrying heavy and medium weapons, hundreds of more reserves of different types of ammunition, all in the beaches of the Bab al-Mandab area. “These weapons were to be sent from Iran to Houthi militants and forces loyal to Ali Abdullah Salah. However, the National Army of Yemen discovered and confiscated these arms,” said General Ahmed Seif Aliyafei.
Investigations have shown that this amount of weapons have been sent from two islands in Africa that the Iranian regime has leased them as bases to provide training for Houthi militants. It is worth noting that the Yemeni government has to this day discovered and confiscated a number of arms consignments being smuggled by Iran’s Revolutionary Guards for such militia groups. A few months ago an Australian Navy ship discovered and confiscated a large amount of various weapons sent by Iran for Yemen. The personnel of this ship said following their investigations that these weapons were being transported by a fishing boat from Iran heading to Yemen for the Houthis.
The HMES Darwin of the Australian Navy intercepted this ship while patrolling waters 275 kilometers off the coasts of Oman. The shipping boat lacked any flag and a significant amount of different weapons, including nearly 2,000 AK-47 rifles and 100 mortar launchers. According to the Australian Navy these weapons were sent by Iran and arrangements were made for them to be provided to the Houthis through the Somali coasts.


Iran is spending the money relieved from sanctions after the nuclear agreement to quickly take more action and export weapons and bombs to terrorist groups across the Middle East. Now, one should say to Mr. Obama and different European countries that seek to continue appeasing Iran, especially since they claimed Iran changed its approach and behavior in the Middle East following the nuclear accord: you are either very naïve, or you wish to close your eyes to the crimes of this regime. Anyhow, this will backfire on the nations of the entire Middle East.
Read more:http://www.hurriyetdailynews.com/one-ton-bomb-unearthed-at-turkish-customs-gate-to-iran-.aspx?pageID=238&nID=101623&NewsCatID=341
Posted by glo.thread.assess at 23:30