The truth behind the bomb discoveries & terrorists arrested in Tehran 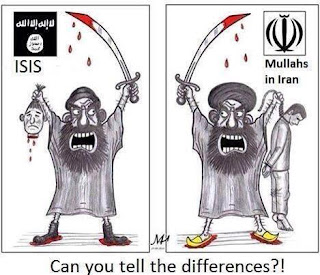 July 2016
Recently Iran on a number of occasions announced the discovery of ready-to-explode bombs in Tehran and arrested a number of individuals in this regard. These reports were provided in a very vague nature, saying the details would be delivered at a later time. However, no details were ever provided. On June 29th an airplane was ground in Tehran airport and passengers were departed as authorities cited a possible bombing plot. The plane was allowed to take off after all the cargo was inspected.


In the midst of anti-ISIS operations staged in Iraq’s Sunni areas, Iran-backed Shiite groups in Iraq, along with their Quds Force advisors, are committing horrific crimes against the residents of liberated cities. This is the exact will of the Iranian regime as it pushes the Sunni community towards ISIS to avenge the crimes committed by ISIS. This also plays into the hands of ISIS.
Posted by glo.thread.assess at 23:25